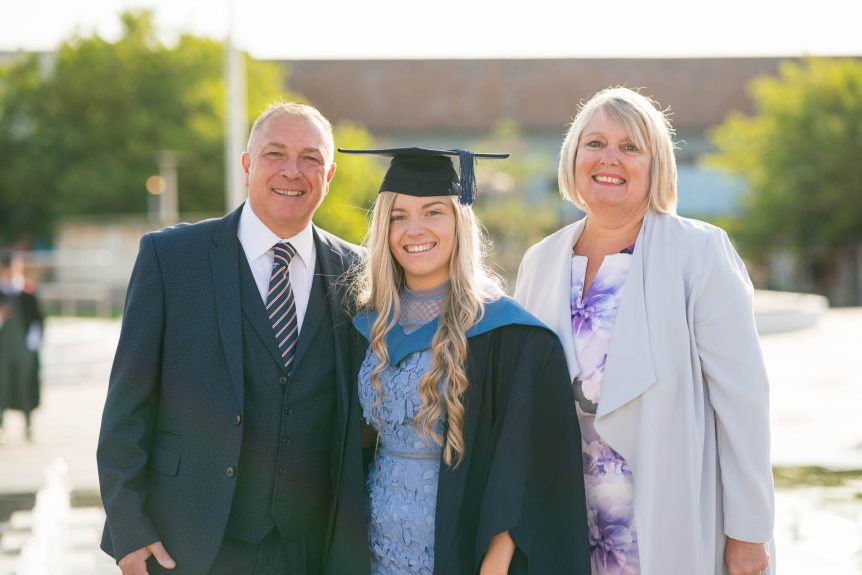 University Centre Weston (UCW) celebrated the successes of its students in style on Saturday (21st September) with its annual Graduation Day event.

The centre of Weston was packed with more than 500 graduates dressed in mortarboards and gowns and their loved ones for the special day.

Hundreds of well-wishers also came along to the Italian Gardens to watch the processions of graduates and academics to St John the Baptist Church and follow the ceremonies on a big screen.

The entertainment also included performances by Weston Brass Band and The Street Dixie Band, with the graduates and their guests also enjoying drinks receptions in the Winter Gardens ballroom.

The ceremonies themselves saw the graduates collect their degree certificates and take part in traditional mortarboard tosses.

Dr Phillips CBE said: “I am so proud of what our graduating class of 2019 have already achieved and have no doubt that I will continue to hear about their careers and successes in the years ahead.

“I am also really pleased that our Graduation has grown to become such a brilliant day, with more and more people every year coming along to cheer on the processions.

“Having the bands and the big screen in the Italian Gardens is our way of saying thank you to our local community for being part of Graduation, and I am also grateful to North Somerset Council, the South West Local Enterprise Partnership and our university partners for their support in hosting the event.

“We will have to come up with something even more special for 2020!”

Hannah Carstensen, who completed her BTEC in Business at Weston College and graduated from UCW on Saturday with a first-class degree in Business Management with Sustainability, added: “It was such a special day, spent with my class, family and friends.

“The ceremony was inspiring and a memory I will treasure forever.

“My journey with Weston College started five years ago and, having continued my studies at UCW, I’m really happy to have turned all of the skills I’ve gained into a professional graduate trainee role.”

More than two-thirds of UCW Performing Arts Honours students were awarded first-class degrees this year, with their academic achievements following on from their recent run of sold-out shows at the Edinburgh Fringe Festival.

Other notable graduates included Beau Ingram, who only joined UCW for his final year and impressed his Applied Computing lecturers so much that he is now teaching on the course.

Uniformed and Public Services graduate and current UCW Student of the Year Jessica Lifton also achieved a first-class degree and has already secured employment with Avon and Somerset Police.

Grace Fox collected her first-class degree in Lens-based Media on Saturday after achieving film festival recognition and a huge number of views on YouTube for her brilliant short films.

From the same course, Peter Harris proved that age is no barrier to higher education after collecting his degree and becoming UCW’s most-mature graduate at the age of 71.

Rimante Zagreckaite and Laura Payne are now UCW’s most-prolific graduates after adding CIPD Certificates in Human Resources Management to the two other degree-level qualifications the pair had already achieved at UCW.