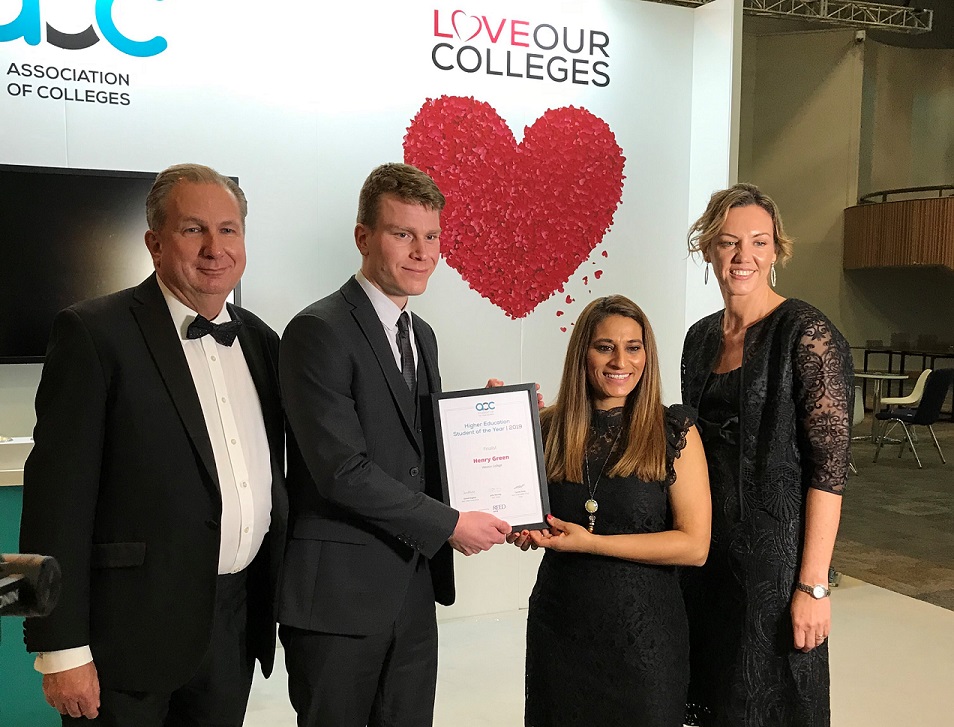 University Centre Weston (UCW) and Weston College graduate Henry Green has been named as the Association of Colleges (AoC) Higher Education Student of the Year runner-up.

He was presented with a certificate to commemorate his success at the International Conference Centre, Birmingham, on Tuesday (19 November) evening.

The 22-year-old completed a BTEC Extended Diploma in Travel and Tourism at Weston College before progressing to a Foundation degree in Tourism Management and Top-up degree in Business Management with Sustainability at UCW.

He impressed the AoC judges by making the most out of his time at Weston College and UCW whilst having a diagnosis of autism.

This included achieving an upper second class (2:1) honours degree this summer, going on trips to the United States and Belgium, contributing to staff development sessions, undertaking work placements and writing about autism for a number of publications.

Henry said: “The best part of the evening for me was hearing the stories of the other nominees.

“The evening also made me aware of the achievement of being nominated – I was lucky to make it to the final three when there were so many other people being considered.

“I was also happy to be representing UCW and Weston College and hopefully this has helped raise awareness of the excellent work they do.”

Dr Paul Phillips CBE said: “Henry is a humble young man who does not appreciate how inspiring he is to those around him.

“He is a wonderful example of someone who has met the challenges of life head on and is very worthy of this national recognition from the AoC.”

AoC Chief Executive David Hughes added: “Each year the level of applications is extremely high, and it goes to show the fantastic work that students are doing in colleges as well as the lengths colleges go to support their students.

“Henry has done amazingly well to finish second and he should rightly be proud of his achievements.”